Some of the most foul and vile odors in the world can be found at the abattoir, where workers and neighbours have to deal with wicked concoctions of rotting flesh and other animal parts.  You don’t have to search too far to find articles describing the battles between city and town residents and their local abattoirs.  The odor issue can be so invasive that often times, citizens are demanding that these businesses shut down to eliminate the nasty outcomes of their rendering processes.

While there were no issues with the local citizens, we did encounter a serious odor problem at the Slaughter House Effluent Treatment Plant in Rabodi, Thane, Maharastra, India.   It gave us the opportunity to demonstrate how little it took to solve such a serious issue.

The smell that was coming out of this plant and the neighbouring Slaughter House Shed was unbearable.  As you can imagine, in a city where the average daily temperature in the winter is 32 degrees Celsius (90 degrees Fahrenheit) and in the summer is 36 degrees Celsius (97 degrees Fahrenheit), the conditions for workers and any visitors to the plant get very little respite from the odors.  This was an issue that needed a solution.

In addition to the odor issues, the effluent treatment plant had problems keeping up to the flow demands with long retention periods and blockages caused by undigested animal waste, meat bone particles and dung.  We conducted two tests with our BIOLOGIC® SR2, one for the rendering plants odors and the other to determine the effectiveness in reducing solid organic waste to liquid.

In the first test, Right Control & Instrument of Navi Mumbai, Maharashtra, sprayed BIOLOGIC® SR2 on 75 square metres (800 sq ft) of the floors in the rendering area. 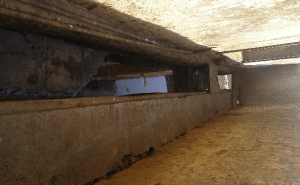 The product was applied at a rate of 1 millilitre per square meter, using less than 1 litre (1 quart) of product mixed with 20 litres of water.  The product mix was sprayed manually and took less than 10 minutes to complete.  Immediately the odor was reduced and by the end of the day, was completely eliminated. 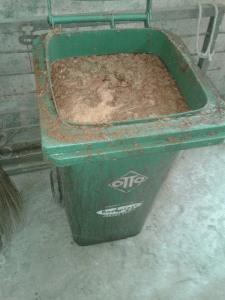 15 millelitres (half an ounce) of BIOLOGIC® SR2 was applied four times, once every 15 days. As a result of the product stimulating biological activity in the pail, the semi solid mass was reduced to a liquid state and the foul odor was completely eliminated.

There really is no need for rendering plants to suffer foul odors.  Such a small amount of BIOLOGIC® SR2  can do so much, so quickly and in an environmentally friendly manner.  BIOLOGIC® technology can make rendering plants, abbatoirs and effluent facilities an ok place to be around; creating an environment where nobody has a need to cry foul at the slaughter house.